Blues Pills are truly one of the hottest bands in recent years and elite within “retro” rock scene. We could say the best days of the scene, where everything is about sixties and seventies are gone. However only by filtering we can see stable stars getting established. No wonder Blues Pills shows are often sold out and as busy is also band’s writing schedule. That’s why I was really interested to see what are the band’s long term and latest inspirations. Bass player Zack Anderson will tell us more. Including few points on gear and challenges during touring.

It is some of the first music I remember hearing because my dad would listen to this album.  It’s a record that has been with me through most of my life and is still one of my favorites.  It’s just great songs and I like stripped down production style.  L.A. Woman is one of the few albums that never gets old for me.

Besides the fact that Marvin Gaye’s voice is one of the best of all time, this album is on the list because of the amazing bass playing of James Jamerson. It’s just one example of many albums from Motown that he played on. It’s amazing to listen to his bass parts because he can do so much and yet it fits perfectly in the song, without being too much. He is one of my biggest inspirations on bass guitar.

One of the best heavy psych albums ever made. I love it for the incredible musicianship and awesome songs that all flow together. Lot’s of dynamics and feeling. It’s impossible not to love.

We listened to this album a lot around the time we started Blues Pills. Because of that it had a big influence on our music back then and still does. The songs create such an emotion and we wanted to try to achieve the same thing. It has a lot of minor chords and sad sounding songs… which we like.

More recently we started to listen to a lot of psychedelic soul music. One of the best producers and creators of this style was Norman Whitfield who produced album for the Temptations, Undisputed Truth, etc in the late 60’s to early 70’s. Involved by Edwin Starr is probably my favourite of Norman Whitfield’s many amazing productions. Every song is solid all the way through.

For me this is simply one of the best albums ever. At a time when everyone else was doing something really heavy like Zeppelin and Sabbath, they did the total opposite and did their own thing. The harmonies between them are heavenly, and it’s a perfect balance of softer acoustic instruments, but still some electric guitars /bass.

One of the best psych rock albums in my book. The unique vocals set them apart and give them a sound all their own. There are so many obscure psych albums from the 60’s and 70’s but this one really stands out as one the best in that genre.

I pretty much love all the albums with Duane Allmann playing on them.  I just have to pick one because they are definitely near the top for my favourite bands. Especially because they were so amazing live, probably better than in the studio. Idlewild South was the first album I heard by them so it’s always going to be near and dear.

It’s hard to be a musician and not be somehow influenced by The Beatles directly or at least indirectly. If you say you don’t like The Beatles, probably some bands you listen to liked The Beatles.   I remember hearing The Beatles pretty much all my life from my parents and aunts and uncles. The older I got, I just appreciated them more and more. There’s a reason they were one the biggest bands ever.

I just discovered this recently, but I include it because it was a moment where I thought, “How have I missed this all this time”. I fell in love with it on first listen. Sweet rhythm section, funky riffs, amazing vocals and lyrics, topped off with beautiful string arrangements. The lyrics are powerful and meaningful. What’s not to like?

What brands of gear do you prefer? I love the sound of the band and therefore I was wondering if you collect and search for vintage instruments? Any unique effects you use?

We use a lot of vintage stuff, but also new stuff if we like how it sounds.  For basses I’m using vintage Gibson’s and Rickenbacker sometimes. Dorian has a newer SG but the pickups are replaced with Corsa pickups.  He also has a Corsa Les Paul style guitar. For amps we use different ones, usually not the most expensive either. Some no name weird old tube amps, as well as Kustom tuck and roll amps. I have a Carlsbro solid state that I sometimes use for bass. It’s worth nothing and isn’t cool, but it sounds fine and it’s the one that never breaks. I got a fender dual showman that I liked but it broke down after 3 shows, so hopefully I get that back soon. We are pretty minimalistic with pedals, but Dorian starts to use a few more with the newer songs. They are mostly nothing too fancy.  I know he has a Chicago Iron Octavia, MXR carbon copy and micro amp, an echoplex drive pedal, plus couple more.

I have to also compliment you guys on clothing you had not only in Tourcoing 2016 but also in Czech Republic multiple times. Please let us know if you cooperate with some designers, who either design or pick clothes for you. If you could, please comment, how do you also manage the “logistic” of garderobe on tour? Washing…

For the most part we just buy clothes ourselves wherever we find them. Recently we started to work with a girl who is a designer and will do some custom made clothes for us. It can indeed be a bit tricky with washing on tour. Often venues will have some washing machines, but it’s very hard to get your turn because everyone wants to use the one machine. Usually you have your stage outfit you only where while on stage and have to use it a few times before you get to wash it. That’s life on the road.

What do you do to keep your live performance on high level every time? Any specific warm ups, diets and resting patterns?

Some things we do include standard warming up, especially for Andre playing drums, and Elin. We also make sure to have a day off every 3 shows or so. It’s important for us to have off days to rest and have energy for the next shows and not burn ourselves out. We prefer to have more days off but keep the quality of all shows as high as possible. We try to eat as healthy as we can. It’s usually not too difficult because in Europe the venues usually offer great catering and hospitality, which is great.

I could see multiple times you have great chemistry with the band live, but I can imagine you have very busy schedule not only touring, but also writing and recording. What do you do in your free time with and without the band, which is also needed for healthy relationship…

When you work with music full time, it’s a blessing and curse because it is indeed hard to step away from it. We are pretty much always doing something with music. We kind of are off doing our own things to some extent, but still were always working on something whether its songs, or practicing, or preparing for a tour. Nowadays we are working on building a studio in our hometown. So we’ve been spending a lot of time there building and trying to get that done.

Any latest great discoveries with music or literature?

Amy Schumer – Girl With The Lower Back Tattoo 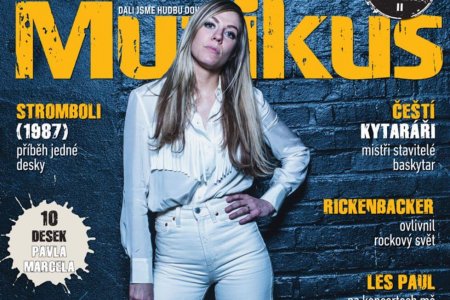