Behind the scenes of a music presentation session for blind and visually handicapped. Participants enjoyed songs from Agnes Obel, Steven Wilson, Beck and others
Skip to content

After a year of negotiations, I finally managed to arrange a music presentation session with SONS (Czech Blind United). It was held in the headquarters of major Czech agency for the blind and visually handicapped. During the two and a half hour session, I presented some of my most favorite songs within ambient/prog rock and the reactions from the people were breathtaking.

Here are the songs, presented during the evening. Each listener had a limited number of points they could dedicate to a song. Congratulations to Agnes Obel, Steven Wilson and Beck.

This idea came to my mind after I spoke to Steven Wilson a few years ago for Czech magazine Rock&Pop. It’s always a pleasure to talk to him, but one of his points was about people not having proper listening conditions and time, to fully concentrate. Another impulse came from an interview I read with legend of Czech music journalism, Jiří Černý. He is traveling around the Czech Republic and presenting music classics, especially from the sixties and seventies to a mostly elderly audience.

About a year ago, I was really interested to take part in some charitatic activity and I don’t know about other European cities, but in Prague, I do come across a large number of blind people. At the same time, they are some of the friendliest people you can meet and they are always very grateful if you help them with directions or to cross the street. To be honest, I am probably not the most “observant” person on the street, as I am walking with my headphones all the time. Therefore, the impulse to move concentration away from music, has to be really strong. I realized I should be more aware of my surroundings and at the same time, I want to give others a chance to enjoy some heart reaching music. It might have been a stupid, self-centered idea, but when I came to SONS for the first meeting, they were really excited and their president told me: “Wow, we had been looking for somebody like you for years. We organized sessions like these many years ago, but nobody wants to do it for free anymore.”

They offered me to organize it in their meeting room, equipped with great speakers. We even solved the issue with a copyright. As they are a charity organization, many limitations and obligations do not apply to them. It was just a matter of finding a date in June 2016. They even offered me to travel with my presentation session around the Czech Republic for their various events. However, everything failed because there were administration “limitations” in finding a person, to stay for extra time after working hours.

However, suddenly after many months, I got a call from SONS in early June saying, they were really sorry, that they didn’t manage to solve their limitations earlier and they really wanted me to make this session happen in two weeks. Timing was insane, but I dug out my old music folder, promotional text and went there once again to check the speakers. Luckily, they were as good as the previous year and everything was ready.

There were about a dozen guests at the session, which we named: “Ambient rock evening with Dan Sywala”. Some of the listeners were fully blind but there were also some with various levels of visual handicap. Some even arrived with a partner to support them and there was also a father, who arrived with his daughter. The structure of the audience was almost balanced but naturally there were a few more men than women. One gentleman even arrived wearing the t-shirt of legendary Czech avant-garde prog band The Plastic People of the Universe. At first, I was a bit nervous, but everybody was super friendly. We even gave a paper to everybody to fill in individually or with a support at the end of the session, giving scores for their most favorite songs. We started with Anathema’s self titled live track from live album A Sort of Homecoming. It’s one of my most favorite tracks, especially for the overall feeling of the song and brilliant guest violin solo from Anna Phoebe. When the song finished, I asked everybody if the loudness was ok for them. The reply I got was the coolest I could get. The gentleman with TPPOTU t-shirt said: “If everybody agrees, turn it up sir!” Finally, I could see some smiles on their faces and for the rest of the session, it was a hell of a ride with very unique and positive reactions. They were making very decent, but passionate movements with their bodies and heads while they were sitting. There was some foot stamping too and even those who were visually handicapped had their eyes closed for most of the songs.

Between each song I included a few sentences to introduce each song. I was very careful not to say something stupid or disrespectful. But to be honest, I caught myself saying few times stuff as: “Well, I saw Sólstafir few months ago…” or “So, I went to see Skyharbor, in this small club in Prague”. But they reacted positively to my stories and even laughed at my jokes. I was even assured by the manager from SONS, I should not worry about it. It was really friendly evening and we got to the end, with one song from Interstellar soundtrack very fast.

Was it all worth it?

When the last track finished and I thanked everybody for coming, their reaction blew me away. Their clapping was so nice and it lasted almost a whole minute. I couldn’t believe it. But that was nothing compared to their personal feedback. Half of the people managed to fill out their papers themselves and I helped the other half myself. They were great in remembering the band’s names and each of them was sharing their massive excitement for certain songs. I was mainly happy, each listener found something for him or herself, as you can see from the scores. Some were totally into prog rock/metal as Skyharbor or Steven Wilson, where others were super excited for Agnes Obel or Beck. Each guest wanted to speak with me for few minutes and to share their feelings. Not saying, I appreciated some more than others, but one gentleman will stay in my memory. He came with an assistant and barely managed to write down his scores, but when he passed me the paper and felt I grabbed it, he said “Thank you” twice and added: “It was really beautiful”.

It assured me, it was all worth it. We are getting lost in our busy lives and forgetting about pleasures of life. Be supportive and enjoy beautiful music.

Next session will be organized next week on 26th of July in Prague. What next? I will try to bring a proper photographer, if all participants would agree. I am also thinking about finding an even better environment with a better technical quality and naturally more great songs. But eventually, we can arrange group visit of some live show. Sólstafir or Anathema in Prague this Fall…why not! 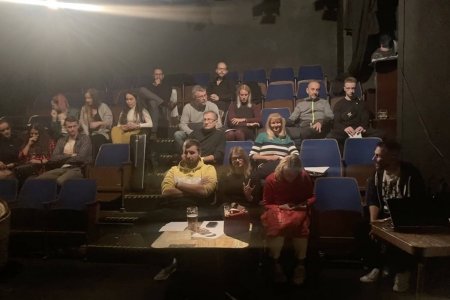 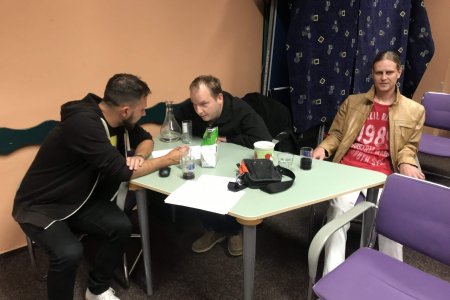 Music For The Blind – Session 31 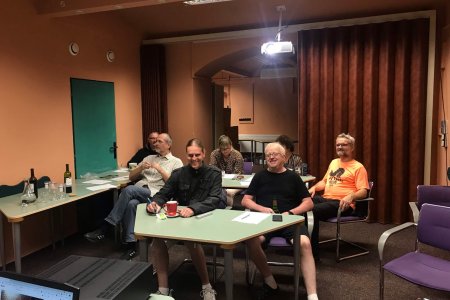 5 thoughts on “Music For The Blind – Session 1”