Shares & Likes
I’m not exaggerating, when I say, we had been looking for a proper front cover picture of Tosin Abasi since January of 2015, when I spoke to him in Prague before the Animals As Leaders show. All regular approaches have failed. Therefore, we had to find a unique solution at the Brutal Assault Festival this summer. Final result: Tosin is on the front cover of the December issue of Czech music magazine Muzikus.

Usually, it’s not a problem to get great pictures from a label of a PR agency, where both entities have a motivation to promote their client. Not mentioning their wish to get someone on the front cover. However, neither agency Hold Tight! PRnor Sumerian Records had a suitable vertical picture. No chance even with their previous label Prosthetic Records. We used horizontal pictures they provided us in the article, but they simple didn’t fit on the cover. However, we are not talking here about some young unknown kid! There are tens of amazing images of Tosin all over the internet. We can see him wearing design clothes, holding unique guitars and having cool backgrounds. So, we thought it would be just a matter of a few emails, as most of these pics are used by the guitar manufacturer Ibanez for promotion. Wrong! Rights to these pieces are held by DiMarzio brand, a specialist on pick-up and guitar accessories. I wish, we could have talked more and made them an offer, they cannot refuse, but any sort of negotiation was rejected in a total Godfather moment! I had to start improvising, if I wanted this thing released.

I even made a request for amateur photographers demanding cool live pictures, but nothing significant happened. Therefore, I had the last option: Catch Tosin personally again. The best option came up this summer at the Brutal Assault Festival where Animals As Leaders were one of the most anticipated acts. Here I have to thank the promoters, as they did the first wave of negotiation with his managers. I just had to catch him before the signing session. However, as it usually happens, almost nothing went according to plan.
First of all, my colleague was betrayed by his camera, so I didn’t have a photographer. Luckily, on the way to the festival grounds I met talented Italian photographer Stefania Rossi. We were hanging out together all of us, with my and her buddies, but typically at festival, technology cannot be trusted. I couldn’t reach her in crucial time on the phone. Therefore, I was thinking to also check in the press center, if somebody else would be interested. Options were quite narrowed, as there was only one person sitting. I introduced myself in English, but we soon realized we are both Czech. Martin Semenyšín is also very skilled photographer working both privately for his platform xMartinezzPhotographyx and for Czech magazines Full Moon and Headliner.

We were ready and even Stefania made it on time. However, manager asked us to postpone the photo session after the signing session, which was taking place inside the Josefov fortress. We didn’t have any issues with that, as a total hell broke out outside. Every day around 7pm, there were fireworks. Well, not usual ones, as it was still sunny afternoon. Those were ear blowing fireworks from the “fire” organs above Oriental Stage. It might have been a unique piece of art but the Animals As Leaders manager was really freaking out. Plenty of festival guests were worried about their ears, but imagine any damage to the ears of professional musicians. Luckily, just before the signing session ended, it was peaceful outside again. We went out quickly to check the spot for a photo session. It was really simple work, as the fortress background was really unique. I just kicked away a few pieces of trash (festival grounds are otherwise super clean), ripped some pieces of weed from the wall and kindly asked a single person to move. It was not crowded at all, as the Oriental Stage only had actually a single act on that day – Japanese post rock band Mono.

When Tosin came out, he knew exactly what to do and was ok, with just a few friendly instructions. He was a true posing professional, while two photographers were shooting at the same time. We tried a number of backgrounds but didn’t plan to make it too long, as nobody felt ultra comfortable. Towards the end Tosin leaned towards me and said with a short laugh: “I feel a bit awkward, man.” I looked around and a number of viewers around were rising and I said: “Deal man, we are done. Thanx a lot! At this point, I would like to thank everybody who made this happen, including a bunch of fans, standing peacefully around and enjoying the moment with us. Afterwards, we just did a short phoner to promote the last Animals As Leaders album The Madness of Many. I will release English version of the interview soon…

Music For The Blind - Anathema Live 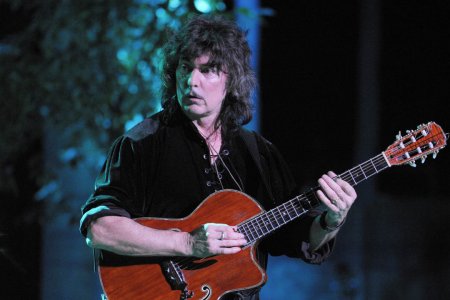 Behind the scenes of an interview with Ritchie Blackmore